PROTECTING YOUR FAMILY IN A CPS INVESTIGATION.

Do you know the 5 things you MUST DO to protect your family during a CPS investigation? 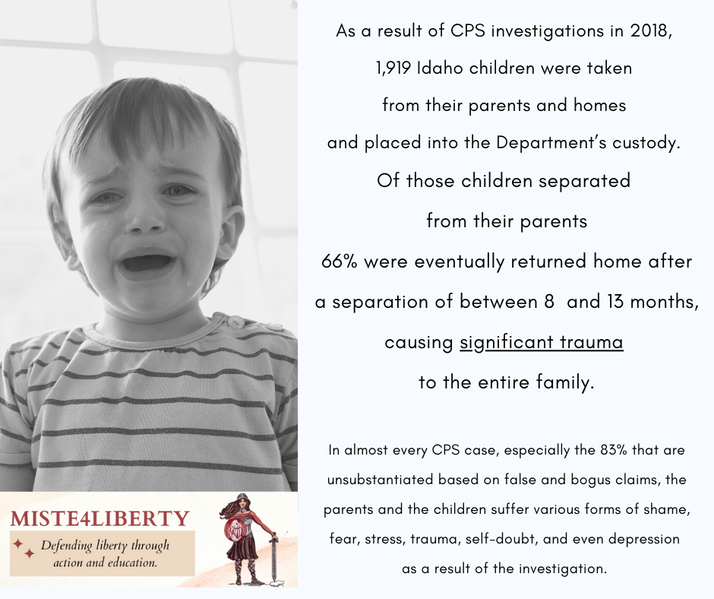 There’s nothing quite like the adrenaline rush and flood of shame that hits when you open the door to find someone from Child Protective Services (CPS) on your doorstep. It’s horrifying. It’s embarrassing. You immediately start to remember every CPS horror story you’ve ever heard and you begin to worry. Since more parents are experiencing a visit from CPS than ever before, and since sometimes those visits have resulted in the quick removal of children – despite no grounds to allegations of harm or abuse – it is critically important for every parent to have a good idea of how to respond to a CPS visit.
​
Parents have been ‘reported’ to CPS for some reasons that have nothing to do with neglect or abuse: The fact of the matter is that over 80% of the calls that are called in to CPS are false and bogus. But CPS says, all calls have to be investigated. In Idaho statistics reveal that almost 80% of the children removed from their parents are returned to their parents. This calls into question the validity the government agency traumatizing the children and their parents with this forced separation, however that is a discussion for another post.
The reality is any visit by CPS should be taken VERY seriously.
The most significant mistakes made by parents are usually in the very first encounter. If you can understand how to handle the very first encounter with CPS, you can increase your chances of maintaining your family’s rights and freedom.
​